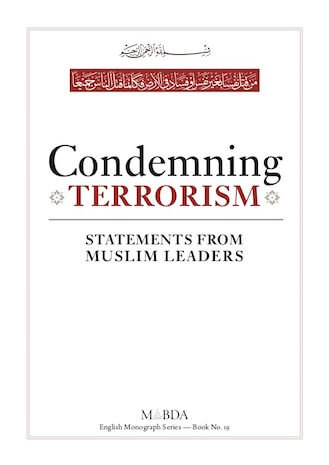 This booklet is a selection of statements issued by Muslim scholars and Muslim organisations condemning terrorism. Many of the statements were made after the 9/11 and 7/7 attacks which were perpetrated in the name of Islam. Although countless Muslim voices – scholars, associations and laypeople – immediately condemned the attacks and rejected that these had any association with Islam, many, if not most, of these statements were not reported in mainstream Western media and so the false accusation that Muslims do not condemn terrorist acts was born.

The voices in this booklet have been selected because of the need to show that religion does not condone terrorism; in fact, it is quite the opposite and this is what the statements of Islamic leaders and religious bodies the world over show. Some of the statements are fatwas – religious edicts issued by a Mufti, a legal scholar; the others are the immediate reactions to these horrific crimes.

The selection has been limited to what has appeared in English (much more is available in Arabic and other languages spoken by Muslims), and is just a fraction of what is available.